If you wish to discuss your immigration fraud issues or wish to retain our services, please complete the form below and we will contact you as soon as possible.

In the "Comments" section below, please include a BRIEF summary of your issue and what sort of assistance you are seeking. Please do not provide the details of your case or issue at this time. 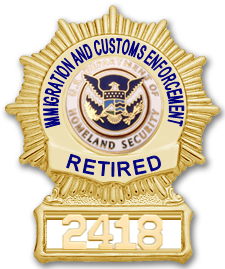 A complete fee schedule outlining services provided and the costs for such services is available upon request. Mr. Sampson is available to appear as an expert witness in criminal and/or civil matters concerning VAWA and marriage fraud.

Since it's formation in January of 2009, Mr. Sampson has been admitted as an expert witness in the States of NY, TN, WI, CO, MA, AZ, NE, CA, IN, and FL, among other states, as well as US District Courts in TX, VA, and CO. His areas of expertise in which he has testifed are: Immigration Law, Immigration Procedure, Forensic Document Analysis, Immigration Fraud in general, and marriage and VAWA fraud in particular, as well as T Visa Fraud and U Visa Fraud. He has testified in excess of nine trials, with more scheduled in the coming months.

The initial consulting retainer is for ten hours of work at $170.00/hour which amounts to a retainer of $1,700.00, payable in advance and is non-refundable.

Expert Witness fees are a flat fee basis and all inclusive (travel, hotel, incidental expenses) of $7,500.00, payable in full, thirty days or more prior to trial. This fee is also non refundable. This is for appearances in the 48 Contiguous States. Fees for Alaska, Hawaii, Puerto Rico, The Virgin Islands and/or International will be quoted separately.

If retained, full payment is required in advance of the commencement of any services provided or work performed in the form of a retainer.

CSI Consulting LLC DOES NOT accept payment through PayPal. We accept personal checks, cashier's checks and Money Orders. We also use Fresh Books as our primary accounting system which also allows for the use of a credit card which adds a 3.5% credit card processing fee.

If you choose to use a credit card as your form of payment, the procedure is quite simple:

CSI Consulting LLC will send you an invoice via email through Fresh Books with a link to the credit card payment site. Click on the link and follow the instructions, enter your credit or debit card information and payment will be made instantaneously.

Note: There is, however, a 3.5% surcharge that will be added to the invoice amount to cover the fee that PayPal charges for this service.

OR, you can simply click on the button below and submit payment through Pay Pal immediately, in which case you will be contacted within 24 hours to finalized arrangements and begin consulting services.

Hours of Operation: Monday thru Friday, 9:00 AM - 5:00 PM Mountain Time. Please keep in mind that there is a two hour time difference between Colorado and the East Coast, and a one hour time difference between Colorado and the West Coast. If there is no answer when you call and you are routed to voice mail, please be kind enough to leave a detailed voice mail message. We do not answer the phone nor respond to "anonymous" callers.

We do not provide free or gratuitous consultations or advice. The first half hour of consultation will be at no charge. Any additional consultation or investigative assistance will require the payment of a $1,700.00 retainer equaling ten hours of work in advance of any work performed or consultation services provided.
/